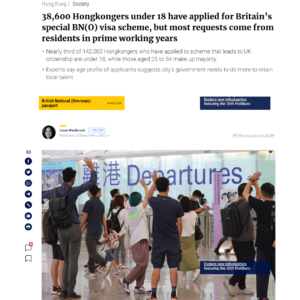 38,600 Hongkongers under 18 have applied for Britain’s special BN(O) visa scheme, but most requests come from residents in prime working years

Nearly a third of 142,000 Hongkongers who have applied for a special visa that leads to British citizenship are under 18, while those aged 25 to 54 make up the majority, official figures obtained by the Post show.

Experts said the age profile suggested the government needed to do more to retain home-grown talent, not just attract non-local professionals, referring to a raft of measures announced last month to make the city more enticing to mainland Chinese and expatriates.

Between January 31, 2021, when the pathway opened and June 30 this year, 38,600 applications for the British National (Overseas) visa were from Hongkongers under 18, of which just 16 per cent were filed from Britain, according to figures from the UK Home Office obtained by the Post.

Hongkongers aged 35 to 44 made up the next biggest group at 32,600, with 13 per cent of those applications made inside the country. The third-largest demographic consisted of those aged 45 to 54, who made 27,800 applications, of which 14 per cent were filed in Britain.

As of June, a total of 133,124 Hongkongers have been approved for the citizenship route since the scheme was launched, according to figures released by the Home Office in August.

An estimated 5.4 million of Hong Kong’s 7.5 million residents are eligible for the pathway, which allows successful applicants and their dependants to live, work, and study in Britain for up to five years, after which they can apply for citizenship.

Britain granted BN(O) status to 3.4 million Hong Kong residents born before the 1997 handover, when the city returned to Chinese sovereignty.

Immigration consultants said the data confirmed what they were witnessing in person, which was Hongkongers aged between 30 and 50 years old were planning to emigrate so their children could study in Britain, with fewer elderly people moving with their family members.

Margaret Szeto, founder of migration consultation company Aura Global, agreed many parents were motivated to ensure their children could study in the UK under the benefits of the BN(O) scheme.

With Hongkongers aged 18 to 24 making up one of the smallest groups, at 6,100 applications, Szeto said young people were choosing to take other migration routes provided by countries, such as Canada, which unveiled two new paths to permanent residency last June.

“They only have to work in Canada for one year before they can obtain permanent residence status, which is faster than the six years required for a BN(O) visa,” Szeto noted.